Posted by Rob Pelmas on Tue, Nov 29, 2016 @ 11:24 AM
There's big news on the horizon- join us and get a preview of whats coming up in December in the world of Xinet. NP is holding a pre release webinar this December 1st, going over their next major release- Version 19. I won't spoil their thunder, but there's some great enhancements coming.


We've been running a  Version 19 beta internally for a few weeks, and it's great stuff. Alongside major news about SMB support and SAML there are some really, really cool improvements in the display layer.

E6 of course will be fully compliant and able to take advantage of the new nuanced abilities provided by the upgrade right out of the gate. We'll also have a information-rich list view in E6 at the same time, for users that need to see lots of files on each page, with metadata and a preview. It's DAM good, if you have that need.

Join us and NP on the 1st, and see what all the fuss is about! 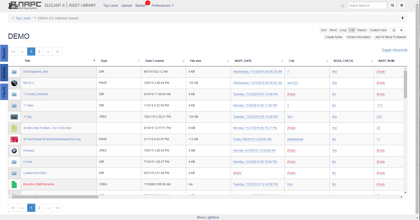 See you on December 1st